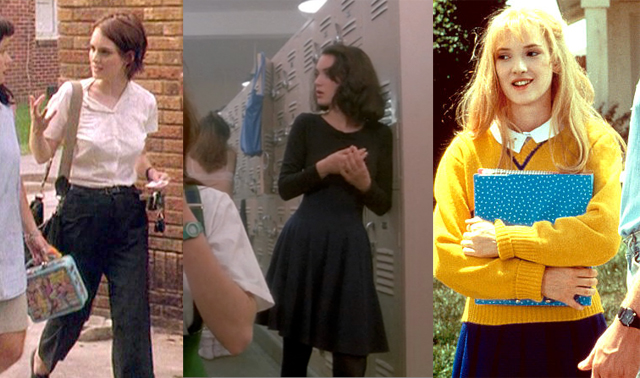 Winona Ryder recently worked on a film, Frankenweenie, with Beetlejuice director and Edward Scissorhands director/producer Tim Burton. This, along with news of Bravoâ€™s forthcoming Heathers small screen reboot, means buzz has been mounting around the forty-year-old actress. Thereâ€™ve even been talks of a Beetlejuice sequel.

Ryder, whose most notable recent film role was as a crazy person in Black Swan, has never not looked incredible in a movie. Weâ€™re pretty sure it would be impossible to make her look bad, as sheâ€™s proven time and time again that thereâ€™s not a time period, sanity level, or hairdo she canâ€™t pull off.

Or maybe sheâ€™s just been fortunate enough to portray some seriously stylish people. From Heathers to Reality Bites to Lucas, click through for Winona Ryderâ€™s best fashion moments in film.

The Return of Winona Ryder
Ryder’s repesentative fires back at shoplifting report
Freed Winona: Ryder On Her Troubled Past, ‘Iceman’ Present and Ruth Gordon Future

(2016) - Stranger Things
Joyce   Release:
A love letter to the supernatural classics of the 80’s, Stranger Things is the story of a young boy who vanishes into thin air. As friends, family and local police search for answers, they are drawn into an extraordinary mystery involving top-secret government experiments, terrifying supernatural forces and one very strange little girl.
News    Photos


This is an unofficial website!
We have no official affiliation with Mrs Ryder or her management.